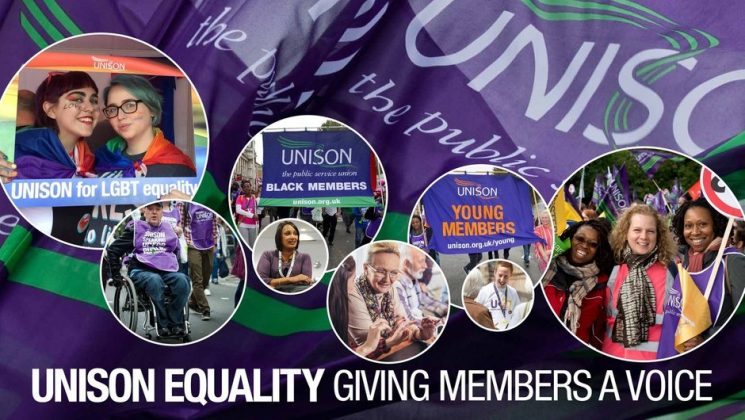 Equality is at the heart of UNISON. We challenge discrimination and win equality in the workplace and beyond. Everyone shares responsibility for equality in UNISON.

But our equality work includes groups for members who experience particular types of prejudice and discrimination.

These groups meet locally and nationally to discuss, campaign and organise around the specific issues that affect them. They help UNISON understand equality and meet our equality aims.

Our four self-organised groups are for black members; disabled members; lesbian, gay, bisexual and transgender members; and women members. We also have equality groups for young members and retired members.

UNISON members who share common concerns come together in groups to discuss, campaign and organise events around the specific issues that affect them.

These ‘self-organised’ groups operate at both national level and within the region. Every one of these groups has a structure with a region and a regional committee.

Member groups work for change in many different ways:

Black members are a core part of UNISON and come together to promote equality in the workplace and campaign against discrimination.

In UNISON, Black is used to indicate people with a shared history. Black with a capital ‘B’ is used in its broad political and inclusive sense to describe people in Britain that have suffered colonialism and enslavement in the past and continue to experience racism and diminished opportunities in today’s society.

The terms ‘minority ethnic’ and ‘ethnic minority’ are in widespread official use today. However, these terms have clear disadvantages in terms of the connotations of marginal or less important and in many neighbourhoods, towns and cities in Britain it is statistically inaccurate or misleading to describe Black groups as a minority.

Historically in the UK the term Black has been used routinely in anti- racist campaigns starting in the 70s. 25 years ago when four Black MPs Bernie Grant, Paul Boateng, Diane Abbott and Keith Vaz were elected at the height of 1980s Black activism, African, Arab, Asian and Caribbean communities had come to realise the importance of unity in our common struggle against racism and under- representation and campaigned under the political term ‘Black’.

Language changes and evolves but terminology is always important in terms of intention and direction. Using Black is about creating unity in our fight against deep-rooted racism that sees Black people disadvantaged in housing, education, employment and the criminal justice and health systems.

Two-thirds of UNISON members are women. Important issues for the women’s group include health, childcare, flexible working and equal rights.

It also supports campaigns aimed at improving women’s lives – for example, to change the law to protect women experiencing domestic violence, or to raise awareness of health issues which mainly affect women.

As a member of UNISON, you have the support and guidance of thousands of other women members, who face the same workplace challenges as you. If you encounter issues such as the gender pay gap or denial of your maternity rights, UNISON can help you with practical information, support and legal advice.

UNISON has around 75,000 young members. If you are a UNISON member and under 27 years of age you are automatically entitled to participate as a young member. Why not get involved and help us campaign for the issues affecting young workers.

Our young members group works to encourage recruitment, organisation and participation of young workers. The group also provides a powerful voice for young members and the opportunity to develop their skills and knowledge.

Join our 75,000 young members who get involved in campaigns to make a positive difference to pay, working conditions and rights.

UNISON retired members in Bridgend have a wealth of experience and knowledge that make them a valuable part of UNISON.

Our retired members work closely with other member groups on almost every issue that affects workers in the UK, as well as fighting for quality public services, on which many older people rely.

UNISON is the only British trade union with a retired members’ group.

Becoming a retired member means that you stay actively involved in issues that affect you and your peers.

As a retired member you can benefit from regular meetings and social outings, as well as the option to join UNISON campaigns.

UNISON supports the social model of disability. This means we believe it is the way society organises itself and people’s attitudes that stop disabled people from taking an equal part in life, rather than their physical or mental conditions or ailments. As a union we campaign on important issues such as:

UNISON’s work on disability discrimination is often led by our disabled members.

Disabled members benefit from a range of national and regional events such as information, discussion and policy-making meetings, as well as training and social events.

UNISON fights discrimination and prejudice in the workplace on behalf of its lesbian, gay, bisexual and transgender (LGBT+) members. We work together in local and national groups of LGBT+ members to campaign and provide support for our members.

UNISON’s lesbian, gay, bisexual and transgender members get support and advice regarding discrimination and equality in the workplace.

We do this by building local and national groups of LGBT+ members, negotiating with employers and offering individual support to anyone experiencing discrimination. We also provide access to practical advice and legal information.

Get protection at work and a range of other benefits from just £1.30 a month.

We use cookies on our website to ensure you find the information you need in the simplest way. By continuing to use our website you are consenting to their use. Find out more about cookies and how we use them.